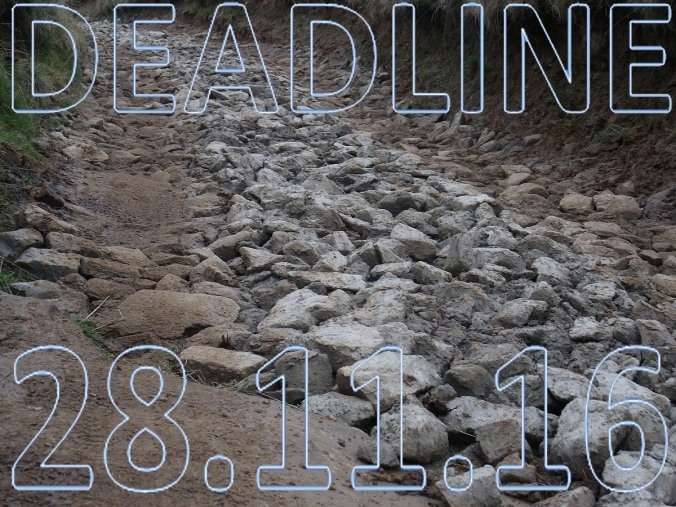 The second consultation on the work up on Rushup Edge ends on November 28th.

To have pushed Derbyshire County Council to run a second consultation was a huge effort from the collected groups campaigning against the work. They deserve a huge amount of thanks and a huge amount of credit for that achievement.

Now it’s down to you – the very people whose support has made DCC think twice – to make it very clear to them that the way they’ve gone about consulting with groups and the work they’ve done so far is simply not right. You need to tell them that while some of the proposed elements of the new plan look promising, they have to stick to their promise and not to have wasted another ton of time and money on what could effectively be a phoney consultation.

As one of the main campaigners I have written a response I want to share with you all before it is submitted to DCC. Hopefully it fits with your thoughts on the work. You may wish to use elements of it to shape your own response too.

For more input to your own response, PDMTB have also been nipping at the heels of DCC and produced some in depth work on what the council have proposed. Take a look. And bravo folks.

I am writing to officially respond to the second consultation on Chapel-en-le-Frith BOAT 144. As one of the primary objectors to the original work it was disappointing to not be consulted directly regarding the revised plans or at the very least given early notification that a second consultation was under way.

As you are already aware, Keeper of the Peak is a Twitter based community of over 1600 people – all who have a passion for the Peak District. Please regard this response as also representative of those 1600+ people.

The plan for work on 144 does not sufficiently show how and where you will do this, nor does it provide any justification as to why it is necessary. Compared to other consultations you have issued, it is non-committal, lacking in sufficient detail to allow an informed response and provides you with flexibility to do what you wish on the 770m in question.

The surface, in the main, was already at bedrock. Erosion will not continue or occur unless materials prone to erosion are placed on the track. This is precisely what you propose to do by the use of granular gritstone as a surfacing material. It is nonsensical.

The track is a sunken route between two high banks. Any water will naturally follow the route of the track. Unless you propose to provide robust drainage down the entire length of the track, there is nowhere to provide water run-off. The current bedrock surface already allows this. In addition, creating route length drainage would narrow the width of the route thus affecting access for users. Finally, talking to the landowner, they are happy for water to run off away from their land to the road (and the managed drainage of the highway). Your plan can only work if you intend to drain on to their land.

The surface is sustainable without work. The plans you have made create an ongoing maintenance need that didn’t exist before. Granular gritstone surfacing has been shown to wash away even with ‘robust’ drainage channels. The work on Chapel Gate completed on the Edale side is wearing away and drainage ditches are full of washed off surfacing. With no maintenance budget assigned to 144, your proposed plan is simply not sustainable.

That said, there are elements of the plan which are sensible. Stone pitching to ‘patch’ those sections where users may have identified a need for sensitive maintenance is sensible, avoids erosion, manages water along the route and is sustainable. Your assertion that you will follow the Pennine Bridleway standards which were used for maintenance on the Roych is reassuring –– please note however that those who cite the Roych as a best practice example refer specifically to the stone pitching elements shown as an example in your plan.

It is important for Derbyshire County Council to note that mountain bikers are one of, if not the largest user group for this route. In earlier consultations this group has been overlooked or apparently, wilfully ignored.

You ask whether if implemented the scheme may affect use and/or enjoyment of the route. A survey by objecting partner group Peak District MTB showed that some 90% of 1400 respondents would enjoy the route less. It’s important to point out that only 2% of respondents in that survey were aware of Derbyshire County Council’s original plan. Consultation failed.

As stated in my earlier response I support the recommendations that Derbyshire County Council (DCC) should:

Regarding the priority of maintenance on the route, I believe 144 is a low priority route in line with the Countryside Agency and English Nature’s definition:

It is my firm belief that Derbyshire County Council’s Rights of Way team have failed to sufficiently consult with users affected by these changes and that despite repeated and consistent objection, that they are determined to continue the work regardless of concerns raised.

The latest consultation does little to change that assumption.

To summarise, the new plan shows insufficient detail to make an informed response on the work. Instead, users of the route – primarily mountain bikers – are left to guess, gamble and trust you to complete the works in line with their overwhelming feedback that the mentioned stone pitching/Roych approach is favoured. Based on your previous projects – Long Causeway springs to mind – this may be foolhardy.

I stand by my earlier response and the points I make in this letter. I look forward to seeing this response featured in upcoming discussions related to the ongoing work.

As a final point I would like to suggest that none of this was necessary. Had Derbyshire County Council consulted proactively and openly with interested user groups, a collaborative, constructive and satisfactory outcome could have been found far sooner. You have been invited to collaborate with local advocacy groups repeatedly. Repeatedly you have ignored or refused those invitations. There is clear evidence that when authorities engage with local community groups a proactive and constructive relationship can develop. You have steadfastly – bizarrely – refused to engage with these groups. Two years into this ‘project’ maybe you will consider changing your approach.